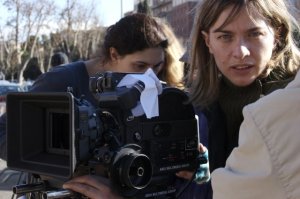 Francesca Amitrano was born in Naples in 1979.   She graduated as cinematographer at the Centro Sperimentale di Cinematografia, Italy’s national film school, under the guidance of Giuseppe Rotunno in 2007.

After attending the Budapest Cinematography Masterclass with Vimos Zsigmond, she joined the camera crew on the set of Gomorra (directed by Matteo Garrone, cinematography by Marco Onorato), then moved to France in 2008 to work as camera assistant.

In 2009 Francesca started her collaboration with director Guido Lombardi shooting Vomero first short, following to that they shot together  La- bas – Educazione criminale, which premiered at the 68th Venice International Film Festival winning the Leone del Futuro award for best film by a first-time director and the Premio Kino award of the 26th Settimana Internazionale della Critica.

Francesca would be present at the following edition of Venice International Film festival, in 2012, with two films: Radici, a feature documentary directed by Carlo Luglio, and Il Gemello, a documentary feature directed by Vincenzo Marra, focusing on the life of an inmate of Naples’ main penitentiary.  Both films were screened in the Giornate degli Autori section of the venetian festival.

In 2012 she was invited to join the prestigious AIC, Italy’s national society of cinematographers.