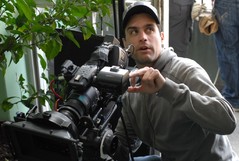 Krum Rodriguez was born in Sofia in 1977.  He studied cinematography at the French Academy of Image in Bogotà, Columbia, then he graduated as cinematographer at the National Academy of Film in Sofia in 2005. He is a member of Bulgarian Association of Cinematographers and directed the photography of “THE COLOR OF THE CHAMALEON” (Emil Hristow, Bulgaria, 2013).

Why did you decide to become a cinematographer?

As a kid my parents used to encourage me a lot in music and painting and for a long period of time I wanted to become a scenographer. Actually I never imagined myself being involved in filmmaking at all. Later on after finishing high school I failed the exams in the Academy of Fine Arts in Sofia and two years later I bought me a Nikon F3 still camera. That’s how it all started!

How was your debut as cinematographer?

A friend of mine from the film school recommended me to a production company for a commercial that he was assigned to shoot.

What do you like the most about being a cinematographer?

The diversity, the opportunity to travel and meet different people. And getting paid for that.

What was the toughest moment in your career so far?

The night before every shoot.

What’s, in your opinion, the most difficult side of your job?

Negotiating budgets and money with producers.

What’s your opinion about the idea of a festival fully committed to the art and craft of cinematography?